Posted on August 18, 2021 in Automated Planning

But after all, what is automated planning? 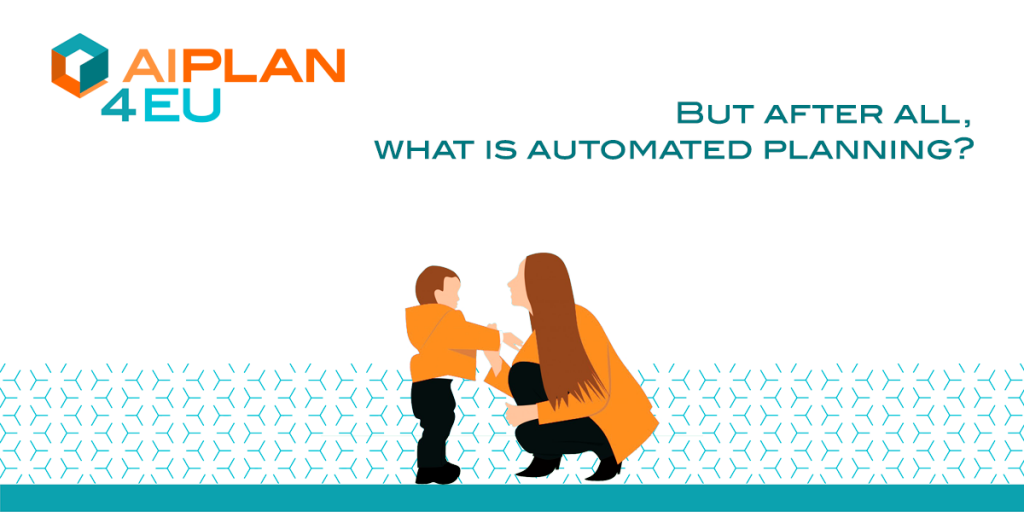 Automated Planning is an area of artificial intelligence where the task is to choose and arrange actions in order to achieve some goal.

This is a pretty definition, but also a very generic one! If you are not involved in this area, this probably means nothing to you! So, we tried to come up with a way to explain automated planning, that everyone might be able to understand, and even maybe repeat to their mothers. 😉

In a simple example, think of four-year-old Tom who needs to get dressed in the morning. Every morning, he wears his pyjamas, checks what clothes are available in his drawer and his mommy tells him how warm it will be that day. In a planning task, such information would be captured by the initial state.

Tom’s goal (and the one of the planning tasks) is that he is suitably dressed, considering mom’s weather forecast.

For each piece of clothing, there is an action to put it on. The obvious effect of the action is that afterwards, Tom wears this garment. But if you ever watched a young kid getting dressed, you know that it is not that simple.

For example, one should wear a t-shirt before putting on the sweater. And one should not still wear the pyjamas when slipping into the t-shirt. In a planning task, such requirements would be formulated as preconditions of the actions. In the precondition of the corresponding action, we could also represent that winter boots are not an acceptable choice on a hot day (something Tom’s mom established by storing them away after repeated discussions).

Most (non-fashionista) adults won’t consider getting dressed a problem they need to put much thought into. But companies face analogous tasks in very different domains – with a much larger space of possible actions and much more complex interrelations.

It will take Tom several years (or at least months if you are a lucky parent!) to learn how to dress properly according to the weather and dressing preconditions. But imagine that you could teach this to your kid in a couple of days. Wouldn’t it be amazing?

The same way in companies, their employees can take weeks or even years to develop a strategy that works well, and still, its quality is oftentimes far away from optimal.

Automated planning offers a different approach to such problems: the user only describes the WHAT of the problem in a purely declarative fashion. The HOW is then resolved by the planning engine.

We use cookies on our website to give you the most relevant experience by remembering your preferences and repeat visits. By clicking “Accept”, you consent to the use of ALL the cookies.
Do not sell my personal information.
Cookie SettingsAccept
Manage consent

This website uses cookies to improve your experience while you navigate through the website. Out of these, the cookies that are categorized as necessary are stored on your browser as they are essential for the working of basic functionalities of the website. We also use third-party cookies that help us analyze and understand how you use this website. These cookies will be stored in your browser only with your consent. You also have the option to opt-out of these cookies. But opting out of some of these cookies may affect your browsing experience.
Necessary Always Enabled
Necessary cookies are absolutely essential for the website to function properly. These cookies ensure basic functionalities and security features of the website, anonymously.
Functional
Functional cookies help to perform certain functionalities like sharing the content of the website on social media platforms, collect feedbacks, and other third-party features.
Performance
Performance cookies are used to understand and analyze the key performance indexes of the website which helps in delivering a better user experience for the visitors.
Analytics
Analytical cookies are used to understand how visitors interact with the website. These cookies help provide information on metrics the number of visitors, bounce rate, traffic source, etc.
Advertisement
Advertisement cookies are used to provide visitors with relevant ads and marketing campaigns. These cookies track visitors across websites and collect information to provide customized ads.
Others
Other uncategorized cookies are those that are being analyzed and have not been classified into a category as yet.
SAVE & ACCEPT